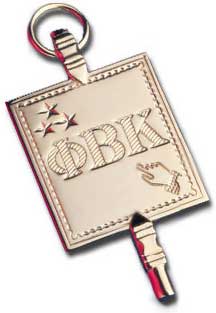 On the front of the Phi Beta Kappa key, a pointing finger symbolizes the ambition of the young scholars who founded the organization. Three stars symbolize the three distinguishing principles of the Society: friendship, morality, and literature (scholarship). 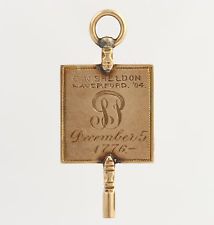 On the back of the key are the letters S and P, initials for the Latin motto Societas Philosophiae, or "philosophical society."

Phi Beta Kappa are the Greek initials of the motto Philosophia Biou Kubernetes, love of wisdom, the guide of life.

Those students who are invited to join have been chosen by the Phi Beta Kappa chapter as a whole after a careful review of their academic record. Students are considered automatically during their final semester of study, provided they have applied for graduation by the university deadline.

Only students in the College of Arts, Sciences and Education (CASE), the Steven J. Green School of International and Public Affairs (SIPA), and other select programs are eligible. Transfer students should be aware that to be considered for Phi Beta Kappa, they must have completed a minimum of 45 FIU credit hours prior to their semester of graduation.

Although the honor bestowed by membership in the society recognizes academic achievement, the qualifications for election to Phi Beta Kappa are entirely independent of the academic policies of Florida International University, and it should not be assumed that fulfillment of the requirements for graduation render one automatically eligible for election to Phi Beta Kappa.